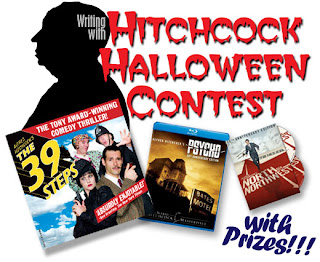 Writing with Hitchcock is proud to announce our first Hitchcock Halloween Contest!

Now is your chance to get into the spooky spirit of the season by dressing up as your favorite character from an Alfred Hitchcock movie—Norman Bates, Melanie Daniels, Richard Hannay, Mrs. Danvers? Or perhaps you'll dare to disguise yourself as the Master of Suspense himself? In any event the contest is very simple…
Between now and 12:00 AM Eastern, Tuesday, November 2, 2010, submit your photo to the Hitchcock Halloween Contest by posting it on the Writing with Hitchcock Facebook Wall.

For more info on The 39 Steps visit www.39Stepsny.com. For tickets visit Telecharge.com.

CONTEST RESTRICTIONS: First Prize is valid for two orchestra seats to The 39 Steps at New World Stages in New York City on a select performance through December 30, 2010. Winner will have the option to choose from a variety of dates. Blackout dates apply. Second and Third Prizes are Region 1, US Release only.

Posted by stevenderosa at 5:10 AM