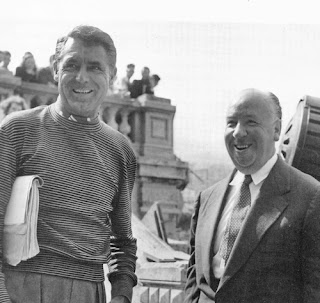 On this day in 1904, Archibald Leach was born. He left an indelible mark on cinema and our culture as Cary Grant. He was, in the opinion of so many of his fans, the personification of elegance.
Screenwriter John Michael Hayes shared many memories of his experiences with Grant during the making of Hitchcock’s To Catch a Thief, as well as another unproduced project that was intended for the actor. Here is one of Hayes’s memories of Cary Grant excepted from Writing with Hitchcock, and followed by an audio excerpt from one of the actor’s one man show appearances, A Conversation with Cary Grant.
One of screenwriter John Michael Hayes's recollections of Cary Grant included the actor often arriving on the set in the morning with pages of script that he had gone over the night before, saying, “Hitch, I have an idea.”

Hayes was then given the task of stalling Grant until it was too late to work in his suggestions. “Well, that’s very interesting. Let me think about it,” the writer would say. Eventually the crew was ready with the next setup, and it was time to shoot the scene.

Later Grant would insist on running through a scene both ways to get Hitchcock’s approval. Hayes remembered the actor being unnaturally awkward when doing the scene as written, then doing his own version to perfection, saying, “What do you think? Which one is best?”

“We had to come up with a gimmick to forestall this,” said Hayes, “because Hitch planned every script very carefully, down to camera angles, way in advance and didn’t like to improvise too much on the set ... so the next time Cary did that, we had everybody on the set primed. When he did the scene as written, everyone, from the grips to the lighting boys, broke out into applause.”

“I guess it’s all right the way it is,” said Grant, who eventually caught on and enjoyed the joke.