Hitchcock Perfects His Craft with SABOTAGE

I've always had a fondness for Alfred Hitchcock's Sabotage, while being fully aware that it is in many ways the darkest of what has long been known as the classic thriller sextette from the director's British period, that string of films done mostly in collaboration with screenwriter Charles Bennett that includes The Man Who Knew Too Much, The 39 Steps, Secret Agent, Young and Innocent, and The Lady Vanishes. While each of these films has its moment where Hitchcock gets to showcase his visual panache, as well as his understanding that sound too should be used cinematically, it is in Sabotage that Hitchcock really struts his stuff.

In the sense that The 39 Steps and The Lady Vanishes are generally remembered more fondly, I've often likened Sabotage to The Godfather Part II in that it is generally regarded, by movie-people at least, as the "better" of the first two in the series, while The Godfather is generally speaking the more entertaining movie. Coppola's later effort, like Hitchcock's, is the more technically complex and refined film. In the video above, I discuss some of the techniques that Hitchcock brought to Sabotage and why I regard it as the dark masterwork of his English period.
Posted by stevenderosa at 12:51 PM No comments: 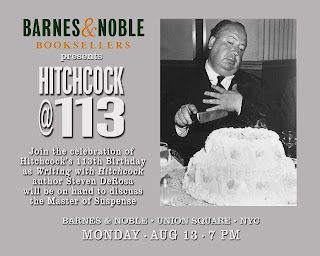 It's hard to believe that thirteen years have passed since what seemed like a year of centenary celebrations for Alfred Hitchcock in 1999. I hope you will come and join me as I mark Hitchcock's 113th at Barnes & Noble in Union Square.


Having lived in Westchester County for a good part of my life, I've enjoyed the view of the Palisades, the cliffs that run along the Hudson River, for many years. Whenever I watch Alfred Hitchcock's North by Northwest, there they are, right out the window of the dining car on the Twentieth Century Limited as Cary Grant and Eva Marie Saint dance around the idea of her inviting him into her drawing room to spend the night. In this video I visit the Philipse Manor Train Station in Sleepy Hollow, just north of the Tappan Zee Bridge, which can also be seen in the film. It was here that the train makes an unscheduled stop and the New York State Police board in search of United Nations killer Roger Thornhill.