. But one can learn a great deal more from one of Hitchcock's misfires than from many other filmmakers' best works. In the case of Stage Fright

, Hitchcock and his writers—which included his wife, Alma Reville, Whitfield Cook, Ranald MacDougall and James Bridie—erred on three distinct points in adapting Selwyn Jepson's Man Running (aka Outrun the Constable) to the screen. 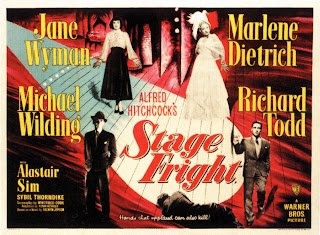 First and foremost, the film's writers chose to ignore one of three triangles from the novel. In the film there are two triangles that come into play. 1) Eve/Jonathan/Charlotte and 2) Eve/Jonathan/Smith. Initially, Eve is threatened by, and in some respects jealous of, the power that Charlotte holds over Jonathan with whom Eve is clearly infatuated. As the film progresses though that triangle becomes less significant as Eve grows closer to Detective Smith. Late in the film Eve remains determined to exonerate Jonathan, but her romantic leanings have clearly shifted to Smith who at least is sending reciprocal signals.


In the novel, however, a third triangle becomes particularly important near the end—that of Charlotte/Jonathan/Freddy Williams. Unlike in the film, Charlotte's lover, Freddy Williams, is the killer in the novel. In order to protect Freddy, Charlotte sends Jonathan to her flat to retrieve a dress. When Eve confronts Charlotte and Freddy with her suspicions, Freddy tries to silence Eve—permanently—making for some suspenseful moments as Eve puts herself in genuine danger in order to clear Jonathan.


This brings us to the film's second flaw. The writers gave their script a weak villain in Jonathan Cooper (Jonathan Penrose in the novel). That he is the unwitting dupe of Charlotte Inwood is consistent with the novel, where it is in fact Charlotte and Freddy Williams who are the pair responsible for the murder of her husband. In the film though, Hitchcock and his writers chose to make Jonathan responsible, and in what can best be described as an eleventh hour twist that goes against everything that has come before, the writers establish not only that Charlotte seduced Jonathan to murder her husband, but that he in fact had killed before, and therefore Eve is now in danger!

The screenwriters' choice to build tension in the film's final moments by transforming Jonathan from Charlotte's pawn to an outright psychopath becomes difficult to swallow, and is directly linked to the film's fatal flaw—which resulted in the need to abandon a long-planned humorous ending.

The treatment by Alma and Whitfield Cook, dated March 23, 1949, ends as follows:

We FADE IN once again on the stone sign 'Royal Academy of Dramatic Art'. We LAP DISSOLVE to a CLOSE SHOT of Eve in another man's arms - they are in the midst of a rather powerful love scene. Eve is doing it extremely well. The CAMERA pulls back revealing the small stage and the dramatic coach, who is sitting in front. The latter stops the scene and compliments Eve on the marked improvement in her acting. She tells her to run over the scene again. Eve acknowledges the compliment and starts again. The scene contains many terms of endearment and kisses. We turn the CAMERA around and show a few students and others watching this rehearsal, - the CAMERA moves in until it comes to a close-up of Smith, who is watching this passionate scene with an extremely glum and pouting expression.. So this is what it's going to be like married to an actress!
FADE OUT.
NOTE: There has been a suggestion that instead of an End Title the following words should be put at the end of the picture:
"So, you see, my advice to budding actresses is to get mixed up in a nice murder case.
(Signed) Alfred Hitchcock."

This idea in the treatment was then scripted in a number of ways, one by the writer Ranald MacDougal, which takes place in the rehearsal hall.

FADE IN.
OF DRAMATIC ART - CLOSE UP
Again we see the stone sign 'ROYAL ACADEMY OF DRIC ART'.
QUICK DISSOLVE TO:
INT. REHEARSAL - EVENING - CLOSE UP
Eve is in the arms of a strange very tall blonde young man. She is playing a love scene, and doing it extremely well.
EVE
(deeply moved)
"But I do understand. I know all the fear and horror you must have gone through, my darling….And I only wish that in some small way I could have - saved you from yourself, saved you from your tragic fate..."
She kisses the young man passionately as the CAMERA PULLS BACK to reveal the small stage of the rehearsal hall and the same dramatic coach, Miss Ashton, seated in the front row. As they break away from the kiss Miss Ashton leans forward -
MISS ASHTON
(in a pleased voice)
Very nice, Eve. Very nice indeed. For some mysterious reason, your acting has improved enormously…Shall we do that little scene again?
Eve and the young man begin the scene again - the CAMERA BEGINS TO turn around from the stage until it faces the auditorium - there are on or two other student behind Miss Ashton watching. CAMERA S IN UNTIL IT REACHES A solitary figure - it is Smith. When Camera reaches him in CLOSE SHOT we see he is watching this love scene with an extremely glum expression. Over this we have heard;
EVE'S VOICE
"Oh, my darling, I thought I'd never see you again! - Hold me close. Close!..."
YOUNG MAN'S VOICE
"I love you so terribly ... my dearest..."
EVE'S VOICE
"What can I do to help you? Where will they take you tomorrow?"
YOUNG MAN'S VOICE
"I don't know. Oh, Helen, I feel I've been so weak…But you can't understand what torture these months have been..."
EVE'S VOICE
"But I do understand. I know all the fear." etc..etc..etc...
Smith is now almost pouting - so this is what it's going to be like, married to an actress!
FADE OUT.
As the scene Fades out instead of The End title, the following words DISSOLVE IN -
"So, you see, my advice to budding actresses is to get mixed up in a nice murder case.
(Signed)
Alfred Hitchcock."

OF DRAMATIC ART. CLOSEUP.
FADE IN: Again we see the stone sign
" OF DRAMATIC ART"
QUICK DISSOLVE TO:
INT. SSING ROOM AT R.A.D.A. EVENING
Half a dozen girls dress in this room and there is a    confusion of make-up boxes, dresses etc. THE CAMERA searches for Eve and finds her, alone in the room, dressed in under- clothes. She is doing violent exercises of some kind and has obviously got an attack of nerves.
EVE:
Hip bath. Hip bath. Hip bath.
There is a knock in the door.
EVE:
Come in.
CAMERA PULLS BACK to show Smith entering.
SMITH:
Darling, you're wonderful. I'm sorry for coming round in the middle of the show. But I had to tell you…
EVE:
I can't speak to you now.
SMITH:
But I've got the license, and I've seen the Parson and your mother says …
Chubby enters like a whirlwind.
CHUBBY:
Darling, they forgot to call you and you're practically ON. Where's your dress?
EVE:
Oh, my goodness gracious ...
CHUBBY:
Hurry. Hurry.
Chubby throws Eve's dress over her head and fastens it while Eve tidies her hair in front of the mirror.
EVE: (to Smith)
I can't possibly talk to you. There are three producers in front. And I'm late and it's my big scene.
(to Chubby)
Be quick. Be quick.
Smith takes a ring from his pocket.
SMITH:
I have this.
Eve glances at it on her way then exclaims:
EVE:
Oh, how lovely.
Eve looks adoringly at Smith then rushes out of the dressing-room followed by Chubby and Smith.
INT. IDOR.
Eve running, pursued by Chubby, fastening hooks. She holds out her left hand toward Smith who is following her. He slips the ring on her engagement finger. She kisses him and he smiles happily.
INT. WINGS OF R.A.D.A. STAGE.
A student Stage Manager and Miss Ashton in a panic as Eve arrives still holding Smith's hand - followed by Chubby. Miss Ashton looks disapprovingly at them.
EVE: (in a whisper)
Sorry.
MISS ASHTON:
It's no good being sorry. There's your cue. Go on.
INT. R.A.D.A. STAGE FROM THE WINGS. MEDIUM SHOT.
Eve rushes on stage into the arms of the Bald Young Man.
EVE:
Oh, my darling ! At last ! At last !
CAMERA MOVES TO CLOSE UP of Smith in the wings. His face loses its pleased expression during Eve's speech.
EVE'S VOICE:
My dear one. My only love. The dark clouds have scattered. The world is full of the brightness of the sun. There is nothing left but happiness. For you and me. For you and me alone, my own beloved. For us alone …
Smith's face shows some lack of appreciation for these sentiments.
FADE OUT.

Ultimately, as much as Stage Fright

grapples with retaining a light tone and humor throughout, once Eve drops the play-acting, and has to experience real emotions to get Charlotte to implicate herself in the murder, and once Jonathan goes full psycho and is killed, it was impossible to swing the pendulum back toward a humorous ending.

Posted by stevenderosa at 7:21 AM